What inhibits the use of FEA for DaDT applications in the A&D Industry?

In this “S.A.F.E.R. Simulation” post we will share the key takeaways for engineers and their managers from a recent ESRD webinar on “Durability and Damage Tolerance Analysis Best Practices in the A&D Industry”. We’ll identify the factors that restrain the wider adoption of computational numerical simulation methodologies, and in particular finite element analysis (FEA) software, when used for detail stress analysis in support of critical engineering tasks such as fatigue life prediction. We hope to lift the fog that exists over the limitations of legacy FEA methods that are encountered by even the most expert simulation analysts. These same challenges make durability & damage tolerance (DaDT) calculations impractical if not risky for the occasional and especially new engineering user to perform.

Why DaDT is becoming ever more important with aging aircraft fleets….

There are numerous fixed wing and rotorcraft platforms that have far exceeded their initial program estimates for years in service. Keeping these aircraft flying safely with ever increasing performance requirements has fueled the need for more reliable and robust computational tools in fatigue life and fracture crack growth calculations to support the DaDT engineering function within repair, maintenance, and sustainment organizations. Aerospace and Defense (A&D) conferences like the Aircraft Airworthiness and Sustainment (AA&S) and Aircraft Structural Integrity Program (ASIP) have become increasingly important in their role to share best practices and new technologies which can improve aircraft life and reduce cost by expanding maintenance intervals. These conferences have revealed the need for new simulation technologies, and software tools based upon them, which improve the fidelity, accuracy, thoroughness, and speed of engineering analysis with improved confidence, reliability, and robustness of results and processes that is independent of the user or model.

To illustrate this growing demand, a strength engineer performing a “typical” stress analysis at the design stage is often delighted with answers within, say, 5% of actual or expected values. But when performing DaDT engineering simulations, being “close” with stress intensity factor (SIF), beta or other fracture mechanics computations is not good enough. For example, as the below figure demonstrates, being off by as little as 5% in SIF predictions can result in a 350% difference in crack growth cycles. The impact of getting this type of prediction wrong can be catastrophic for engineers practicing in the A&D industry (and beyond). 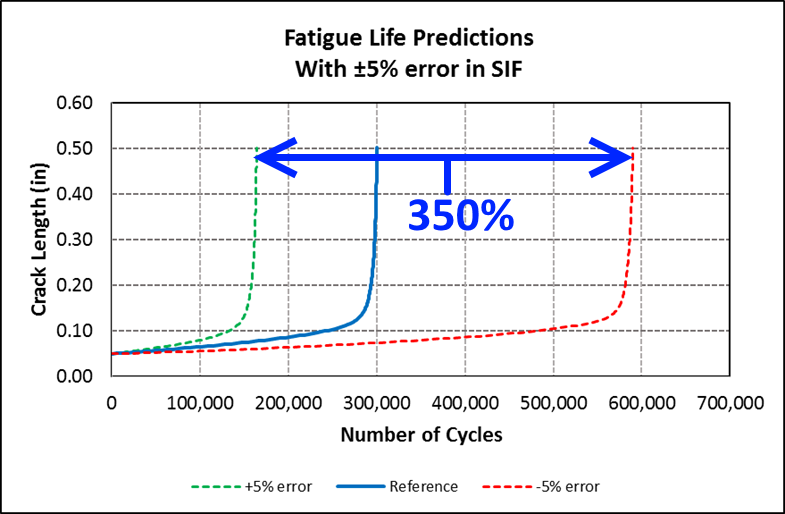 The sensitivity in DaDT life predictions is driven by unknown risks in the input data (e.g. SIF’s)

The application and value of FEA-based tools for numerical simulation is well established in the commercial and military aviation industry. The structural design, loads, strength and stress groups routinely use finite element models to generate internal loads of entire aero structures. FEA tools are then used to perform detail stress analysis to calculate margins of safety on components that are resistant to engineering handbooks, design curves, closed form solutions, and empirical data.

However, in many organizations there is still a preference for quick hand-whipped stress analysis with ample margins of safety when the alternative is constructing complete 3D virtual prototypes with no detail lacking, or to perform more testing on physical prototypes. 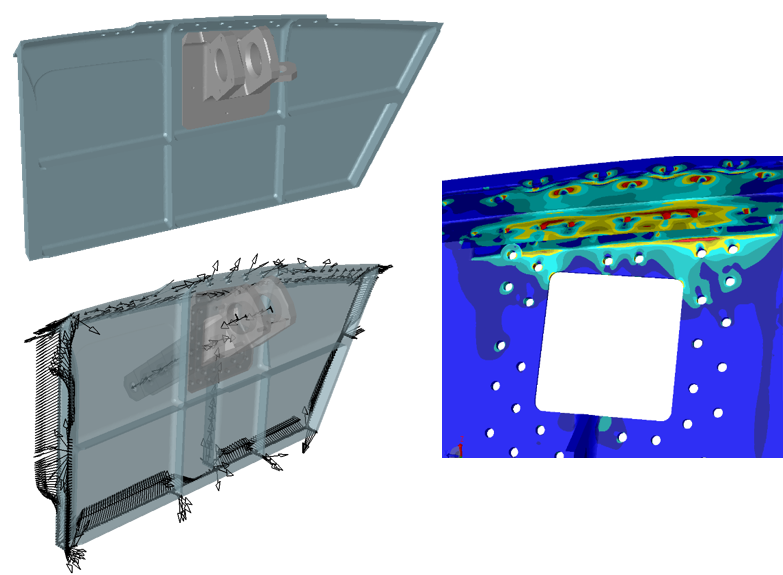 The wider-spread use of FEA tools in fatigue and fracture domains for DaDT calculations is another matter. Over ESRD’s twenty plus years of working within the aerospace community, as well as attending industry conferences like ASIP and AA&S, we have observed a reluctance to turn to the FEA tool kit in the calculation of important DaDT engineering data such as SIF’s. This is surprising as ever-increasing demands on airframe performance and life expectancy are requiring a larger volume of higher-fidelity structural analyses be conducted with improved levels of certainty and confidence. This is occurring at a time where budgetary constraints translates into fewer engineers available to perform analysis work that has become more complex, all with less time for advanced training and fewer resources to rely upon in methods and tools support groups.

In interviewing engineers and their managers who are responsible for DaDT work, we have heard these reservations about the generic use of FEA:

“It takes too long to import and clean up the geometry then build a high-resolution mesh around a high-risk or damaged component.”

“Solving crack propagation problems on my desktop computer takes too long as it is, then I have to go thru many cycles to debug and tune a model to get a result that is believable.”

“The quality of my solutions are a subjective exercise at best, based on my years of experience in handling similar types of analysis problems.”

“My team managers have more faith in historical analysis methods and it’s hard to convince them to let us loose on a digital model.”

All of the above issues were indeed valid at one time. It is not surprising that an organizational dependency arose on using closed-form solutions and empirically-based handbook tables to predict SIF’s. That was true even for design geometries and load cases that had little resemblance to their textbook surrogates.  Yet, not every analysis can be reduced to well-known cases like a simple plate with a thru-crack. It can be risky to force fit an existing curve or table to meet the needs of an analysis which is clearly well out of its original scope. An example is the use of compounding beta factors to account for variances in geometry and loads which can be precarious to apply and prone to error.

Despite these challenges, many DaDT engineers, rather than changing the legacy processes of their organizations, rely on historical methods no matter however approximate they are.  When these simpler methods failed, they would as a last resort – clearly not the first choice – turn to FEA for modelling complex 3D geometries with a wide variety of loadings, material types, residual stresses, crack shapes, and other complicating features.

Despite their longevity in the industry, even legacy FEA methods and software struggle with these more complex classes of problems in DaDT, even when employed by simulation experts.  Obtaining consistently accurate and numerically verifiable solutions with traditional finite element methods has unfortunately added more complexity, time, risk, and cost that was prohibitive for many organizations to endure, especially when they were seeking speed, confidence, and safety.  Only a few highly experienced and well-trained DaDT specialists could perform the work due largely to endless sources of approximations, idealizations, decisions, judgement calls and errors in modelling, analysis, and results interpretation. There was little time available to think about numerical verification, much less understand it was not the same as results validation.

The reason for this state of simulation in DaDT is often obscured by a fog of complexity hiding underneath the hood of legacy FEA codes. The foundational finite element theory, methods, and technology base implemented by nearly all commercial FEA software products has remained largely unchanged over decades. That is not to say there have not been substantial improvements in aspects of FEA such as model creation for faster preprocessing, high performance computing for faster analysis, and improved visualization for post-processing. Yet, these only masked underlying limitations that made FEM an art for the expert masters rather than a reliable numerical computational science for the engineering masses.

These limitations are well known to users of simulation software – as evidenced by the size of the element library – but are less so recognized by their managers who often think this is just the way it has to be. In our next S.A.F.E.R. Simulation post we plan to discuss how these limitations in legacy FEA throttle the wider use and economic value of numerical simulation across the A&D industry. Nowhere is this timelier than in the supply and service chains which have increasing authority for design and analysis, and now new accountability for lifecycle maintenance and program sustainment that requires deeper expertise in DaDT. 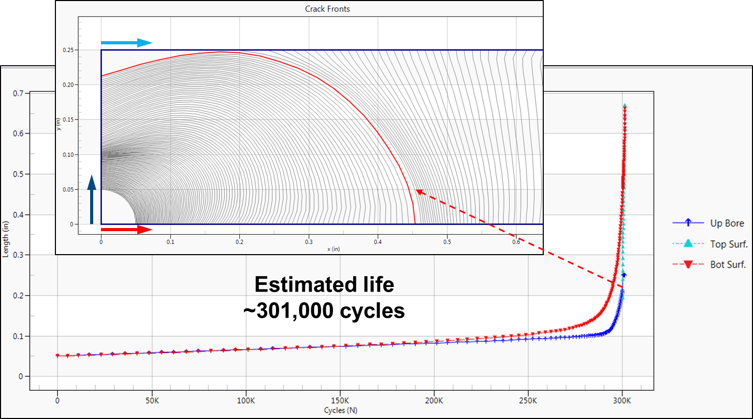 For the last decade ESRD has been at the forefront of advancements in numerical simulation that makes the performance of finite element analysis less a craft of modelling traps, tips, and tricks when practiced by experts, and more S.A.F.E.R. methodology when used by the non-expert. With these advancements it is now possible for DaDT engineers to conduct analyses using more transparent models with greater accuracy, producing faster simulations in more efficient workflow processes which require less re-meshing and debugging, and generating more reliable results from inherently more robust methods independent of the level of expertise of the user or complexity of the engineering problem.

In a future S.A.F.E.R. post on the use of FEA in DaDT we will dive deeper into what makes this now possible in practice. Until then, in the most recent ESRD webinar on DaDT we demonstrated several example fatigue life and crack propagation problems which illustrated that conventional expectations of being “close enough” are no longer “good enough”.  To view this webinar click here. If your corporate firewall prohibits live access please send us an email to webinars@esrd.com and we can provide a link to download.

What do you think… 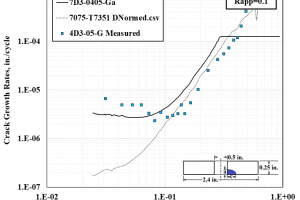 ESRD's Dr. Ricardo Actis attended and presented with technology partner Analytical Processes/Engineered Solutions (AP/ES) at the Engineered Residual Stress Implementation (ERSI) Workshop 2019 in Clearfield, UT. The goal of this annual workshop is to develop a roadmap for the implementation of the beneficial effect of engineered residual stresses in damage tolerance analysis (DTA). Also, ESRD would like to extend our sincerest congratulations to the Washington University St. Louis racing team, who we sponsored this past year to improvements in multiple events, including engineering design. Great job, team! 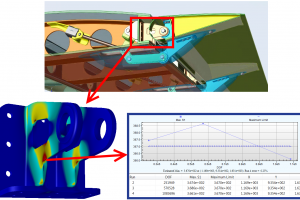 On April 10th, ESRD and Altair co-presented a novel Aerospace & Defense (A&D) industry webinar, "Global-Local Workflows and High-Fidelity Stress Analysis for a Wing Flap Hinge Fitting". If you were not able to attend, don't worry; the on-demand webinar is now available! [...] 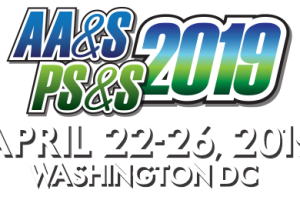 ESRD to Exhibit and Provide Training Course at AA&S 2019

ESRD, Inc. will be exhibiting and providing a training course on verifying the accuracy of engineering simulations at the AA&S/PS&S Conference 2019 in Washington, D.C. from April 22-26, 2019. We hope you will drop by our training course and booth to check out the latest!